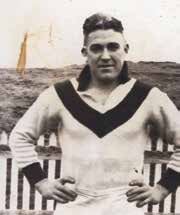 “I could not name many [players] who had so many outstanding qualities.” These were the words of the great Gordon Coventry when asked to describe a player we honour as an Icon of Tasmanian Football.

A player to whom every great skill in the game came as naturally as breathing, Laurie Nash is still revered as one of football’s greatest talents more than 70 years after his last game. Lawrence John Nash was born in Melbourne on May 2nd, 1910. He came from a prominent sporting family, with both his father and grandfather having played VFA/VFL football.

In 1929, Nash moved to Tasmania after his father bought the hotel at Parattah, bringing with him a name as an outstanding young athlete. Despite having never played senior football, Nash’s reputation saw him pursued by many Tasmanian clubs, and he eventually opted to join NTFA club City under iconic coach Roy Cazaly. Nash made his debut for City in the opening match of 1930; in a sign of things to come, he was named ‘Best on Ground’ for his brilliant performance. Over the following three seasons, Nash established himself as a star at Centre Half Back for City and the most exceptional young footballer in Tasmania. His form saw him rapidly recognised for higher honours, and after just 14 senior games he was selected in Tasmania’s squad for the
1930 Adelaide Carnival, a tournament in which he was adjudged as Tasmania’s best player. He would also represent the NTFA on 10 occasions, and showed the first signs of his future stardom as a forward when he booted 11 goals in a match against the NWFU in 1932. Back with City, Nash played a key role in the club’s NTFA and State premiership triumphs in 1930 and 1932, while individually he claimed back-to-back City and NTFA Best and Fairest awards in 1931 and 1932.

By the end of 1932, Nash was being vigorously pursued by many VFL clubs and it was eventually the Roy Cazaly connection and a princely sum of £3 p/w that saw South Melbourne win Nash’s signature. Nash was one of many interstate signings the ‘Bloods’ procured during this period, a group that would famously become known as South’s ‘Foreign Legion’. In Nash’s first season of 1933, the ‘Legion’ played a major part in South Melbourne annexing their first premiership since 1918, with Nash’s ‘Best on Ground’ performance in the Grand Final particularly praised. In five seasons with South Melbourne, Nash transformed himself into a Centre Half Forward of national renown, forming a great partnership with legendary Full-Forward Bob Pratt. Thanks to his dazzling array of skills, he was capable of playing literally any position on the ground. To again quote Gordon Coventry: “He had the safest pair of hands imaginable, while his turn left or right as he came down with the ball was something opponents couldn’t combat. He could hold down Centre Half Back, Centre Half Forward and other key positions with the skill of a champion. If he had been played permanently at Full-Forward he would have outshone all Full-Forwards of my time, including myself.”

This last statement was prompted by arguably Nash’s greatest ever performance, which came in an interstate match for Victoria against South Australia in 1934. Starting the match at Centre Half Forward, Nash kicked two goals before being moved to Full-Forward early in the second quarter. What followed was one of the greatest individual performances in football history, as Nash finished with an astonishing 18 goals to forever etch his name into football folklore. In 1938, Nash became one of a number of high-profile defections to the VFA when he left South Melbourne to join Camberwell as captain-coach. Nash’s brilliance saw him become a huge drawcard for the Association, however his relationship with his players was rumoured to be less than cordial and he
departed the club in 1941 when WWII saw the VFA competition suspended. After enlisting and serving in New Guinea during the war, Nash returned to Melbourne in 1945 and was convinced to have one last crack at VFL football with South Melbourne. Now 34 and struggling with bad knees, Nash was nevertheless still a fine player, topping South’s goal-kicking list with 56. His 99th and last VFL game came in the 1945 Grand Final, a spiteful encounter against Carlton still known as ‘The Bloodbath’. Nash subsequently retired to take on coaching roles in the country, achieving the remarkable feat of coaching two clubs – Wangaratta and Greta – to premierships in the same season in 1946. His last official role in football came when he returned to South Melbourne for one season as coach in 1953. Nash maintained a strong connection to football in later years, writing columns for the Sporting Globe (amongst others) and appearing on television shows such as World of Sport as a football analyst.
Outside football, Nash was also one of the most talented cricketers of his generation. An outstanding fast bowler, Nash made his test debut for Australia in 1932 after taking 7-50 for Tasmania against the touring South Africans. Known as a skilled exponent of intimidatory bowling, many in the Australian team argued for Nash’s inclusion during the 1932-33 ‘Bodyline’ series. Unfortunately, Nash’s penchant for clashing with authority saw him play just two test matches over six years, a total Australian star Keith Miller later called “the greatest waste of talent in Australian cricket history.” Arguably the most gifted all-round athlete Australia has ever produced, Laurie Nash passed away in 1986 at the age of 76. His genius on the football field was
posthumously acknowledged with his inclusion in no less than four Teams of the Century, as well as the Australian Football Hall of Fame.

Viewed as an icon of the game overall, he is now officially acknowledged as such in the Tasmanian Football Hall of Fame.