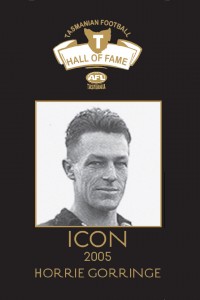 > Described as the greatest player in Australia during his prime
> Eight TFL premierships for Cananore
> Eight state premierships for Cananore
> Member of the famous 1923 Tasmania team that defeated South Australia
> Tasmanian state carnivals, 1921, 1924 and 1927
> Best player award, 1924 Australian Carnival
> Member of the Tasmanian Sporting Hall of Fame
> Named at forward pocket in the Tasmanian ‘Team of the Century’

Quick, elusive and highly skilled, Horrie Gorringe was famed throughout Australia for his roving skills. Known for his running, two-sided skills and resilience, he was chased by every VFL club but commitments on the family farm meant that Tasmanian football benefited from the little maestro throughout his career.
Gorringe represented Tasmania as a State Schoolboy in 1908 in Brisbane and played his first senior game with Cananore at age 17 in 1914. Quick, elusive and highly skilled, he could dispose of the ball with equal precision using either foot. He was also extremely tough, often taking the field carrying injuries that would have sidelined lesser men.

Following the disruption of World War One, Gorringe represented Tasmania in the interstate arena on numerous occasions, including the 1924 and 1927 carnivals. At the Hobart carnival of 1924 he was voted Tasmania’s best player when he more than held his own against the very best that the mainland state sides could throw at him. A year earlier he had been one of the best players afield in the TFL’s famous victory over a South Australian combination on the Adelaide Oval. He emerged triumphant from these appearances, hailed by Australian football legends such as Roy Cazaly, Gordon Coventry and Ivor Warne-Smith as “the perfect footballer” and the greatest rover ever.