The 2018 Induction into the ‘Memorable Game’ category of the Tasmanian Football Hall of Fame is the 1968 NWFU Grand Final between East Devonport and Ulverstone.

By the late-1960s – 20 years since they joined the NWFU – East Devonport had gained a reputation as the competition’s ‘also-rans’, with premierships in 1946 and 1948 standing as oases of success amongst a slew of lowly finishes. The club had really achieved nothing of note since those initial triumphs, and was probably most famous in football circles for giving the football world a player by the name of Darrel Baldock, who had starred for the club as a teenager. After Baldock’s departure in 1961, East Devonport had endured one of the most difficult periods of on-field hardship in club history, with the Swans claiming five wooden spoons in six years between 1962 and 1967. Something had to change, and in 1968, it did. 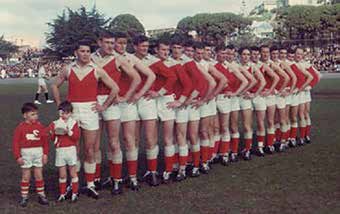 During the 1967-68 off-season, East Devonport president Arnold Richardson attempted to improve the club’s fortunes by spearheading a bold recruiting drive. Many talented players were successfully signed – including former New Norfolk half forward Col Johnstone – however the real coup came in the signing of Graeme ‘Gypsy’ Lee as captain-coach, a Tasmanian legend who had been an All-Australian after the 1966 Hobart Carnival.

Lee came to the role with great experience – having coached Launceston since 1963 – and though he had found little on-field success he had earned a reputation as an outstanding leader of
men. During his final season as Launceston coach, Lee had watched the NTFA’s own perennial cellar-dwellers in East Launceston storm from wooden spoon to premiership in a single season, and he was certain that he could achieve the same feat with his new club. Lee’s approach was to drill into his players what could be achieved through the application of discipline, commitment to the cause and each other and a fanatical desire to never give up. As a result, East Devonport entered the 1968 season full of enthusiasm and a new sense of belief that they would again be a competitive force in the NWFU.

By contrast, Ulverstone had been one of the NWFU’s traditional powerhouses, and had recently claimed seven flags in 11 years from 1947-57. The club boasted an experienced side containing some outstanding players, such as Noel Leary – a young Full Back who would go on to enjoy great success in the TFL – and ruckman Geoff Whitton, an ex-Sandy Bay star who had recently returned from a VFL stint with Melbourne. Whitton had actually taken over as coach after the mid-season resignation of Phil Wynd, and had done admirably to keep the Ulverstone ship steady in the aftermath.

By the time the 1968 finals rolled around, Whitton led the team whom many viewed as premiership favourites. The two teams’ journeys to the 1968 Grand Final could hardly have been more different: Ulverstone finished second after the roster matches, and won their way through to the Grand Final with victory over minor premiers Wynyard in the 2nd Semi Final. East Devonport meanwhile, had had to win their last five roster matches in a row to sneak into fourth place, and had then defeated third-placed

Cooee to advance to the Preliminary Final, where they then faced Wynyard. The Cats had been arguably the best team in the state until an inexplicable collapse in form late in the season, and East Devonport knew that if they brought the same fanatical desire to win to the match that they had for the entire season, they were a chance of producing an upset. What followed was one of the most absorbing and dramatic games ever witnessed in coastal football: after a see-sawing encounter which saw multiple changes in momentum, a goal from Graeme ‘Bibby’ Kelly at the 28 ½-minute mark of the final quarter gave East Devonport victory by just one point, 17.11 (113) to 16.16 (112).

The main point of interest in the week leading up to the Grand Final surrounded ‘Gypsy’ Lee, who had been reported for striking in the Preliminary Final, however he was eventually cleared to take his place in the Grand Final. The pundits were split on who went into the big match as favourite, however East Devonport – playing in their first Grand Final since the Baldock days in 1959 – were clear favourites with the public, with many confident that the NWFU’s ‘Cinderella Club’ could break their 20-year premiership drought. However, Ulverstone would be no pushover, with the Robins eager to atone for Grand Final losses in 1963, 1964 and 1965.
The two sides met on September 21st in bright, still conditions at Burnie’s West Park in front of an NWFU record crowd of 11,866 fans. From the opening bounce East Devonport dominated the play, and quickly posted the first two goals of the game through their spring-heeled full forward John Davis. The Swans continued to press and harry their opponents, before the game was spectacularly broken open by the dazzling play of East Devonport star Col Johnstone. The dynamic half forward slammed on three goals in the space of four-and-a-half minutes late in the term, and at Quarter Time East Devonport held a commanding 40-point lead, with many saying it was already game over for Ulverstone. Unfortunately, the lead had come at a cost, with Swans captain ‘Gypsy’ Lee suffering a nasty gash in his leg less than 10 minutes into the game which severely affected his influence. The second term was a much more even affair, but East Devonport still managed to kick the first two goals of the quarter to open up an eight-goal lead.

However, Ulverstone full forward Kevin Mahoney managed to boot four crucial goals in quick succession just before half time to keep his side in the match, the margin at the main break being a manageable 25 points; it could have been closer still had Ulverstone’s kicking not been so noticeably poor, both in front of goal and around the ground. At half time Lee implored his charges to keep fighting, for the ball and for each other, and that if they did so the flag would be theirs.

The second half continued on in much the same fashion as the first: through a combination of fanatical attack, pressure and brilliant teamwork, East Devonport simply overwhelmed an unprepared Ulverstone combination. By Three-Quarter Time the margin was 54 points and the East fans they knew that the flag was as good as theirs. The Swans took the foot of the pedal slightly in the final stanza, allowing Ulverstone to kick the last four goals of the game and regain some respectability on the scoreboard.

At the final bell the score-line read East Devonport 15.16 (106) to Ulverstone’s 10.18 (78), a margin of 28 points. On the siren the ground was swarmed with numerous jubilant East Devonport supporters, as well as a good number of neutrals who had been gunning for the East Devonport fairy tale to come to fruition. ‘Gypsy’ Lee was presented with the premiership cup by NWFU president Greg Moline, and stated that it was “the greatest thrill of my life.” For Ulverstone, it was a fourth Grand Final defeat in six years, and a bitter pill to swallow.

East Devonport had winners all over the ground: ruckman Ian Stevenson was voted Best on Ground for his performance, dominating the centre in his battle with Graeme ‘Barney’ Howard and Geoff Whitton. In attack, Col Johnstone finished the match with six goals, while John Davis comprehensively won his duel with Noel Leary to finish with four, though he might have hoped for a better return than 4.5. Elsewhere, the back pocket pair of Barry Parker and veteran Gary Davis were impassable for much of the day, while centreman Graeme Kelly and rover Ray Johnson were also prominent.

For Ulverstone, half forward Trevor Stephens was clearly his team’s best, however a return in front of goal of 1.6 seriously limited the influence he could have had on the result, while centre half forward John Leary took advantage of the injury to opponent ‘Gypsy’ Lee to be one of his side’s few damaging players. The following week, East Devonport faced off in the state Preliminary Final against NTFA premiers Scottsdale. Many gave the Swans a decent chance of victory, however weakened by the losses of ‘Gypsy’ Lee and John Davis – the latter on the morning of the game – the Swans went down by 35 points. Gypsy Lee continued to coach East Devonport for another two
seasons, before retiring as a player at the end of 1975 having left a magnificen legacy at the club.

East Devonport’s 1968 premiership completed one of the great ‘rags to riches’ stories in Tasmanian football history, and the match is still spoken of to this day as one of coastal football’s most historic triumphs. 50 years later, the events of that day are still remembered fondly by those who witnessed them, especially within the four walls of the East Devonport Football Club. The 1968 NWFU Grand Final rightfully takes its place as a Memorable Game of the Tasmanian Football Hall of Fame.