The 2018 induction into the ‘Legendary Team’ category of the Tasmanian Football Hall of Fame is the North Hobart team of 1987. 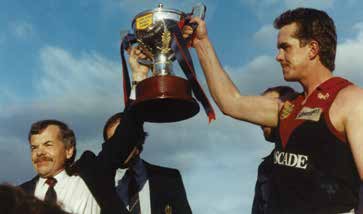 The 1987 season was one of changing landscapes in Tasmanian football.  With the admissions of Burnie and Devonport from the north-west coast, the TFL was a truly state-wide competition for the first time, and throughout the season crowds flocked to watch the best players in the state go head-to-head. It was also a season of change at the North Hobart Football Club, with the appointment of former Geelong and Richmond player (and Tasmanian native) Garry Davidson as coach. Possessing extensive coaching experience and noted as an outstanding tactician, Davidson’s most recent success had come when he guided Glenorchy to the 1983 TFL premiership.

It was hoped that this experience would help North Hobart break a premiership drought stretching back to 1974, a flag that – perhaps prophetically – had also been coached by an ex-Geelong footballer, the great John Devine. Davidson inherited a very talented North Hobart team, many of whom had been developed under Davidson’s predecessor Darryl Sutton. As with any successful side, the Demons possessed a good mix of experience and youth, with old stagers like Jim Mathewson and Leigh Collidge alongside young stars such as
Bradley Plain and Simon Minton-Connell. In addition, the side featured members of some of the club’s most famous footballing families, such as David & Michael Noble, Terry Moore and most notably Mark Devine, club captain and son of the aforementioned John. Davidson knew that he had the list of a genuine premiership contender, however his expert eye decided that the club’s premiership puzzle was still missing one or two pieces. He therefore convinced the club’s board to pursue a few players from other clubs – including Mick Elmer
and Ross Christensen – whom he believed could turn North Hobart from a good team into one that could deliver a flag.

With the list he wanted now in place, Davidson set about transforming the Demons into the fittest team in Tasmania. He pushed the players hard on the track, both in pre-season and during the year, and instituted a weights program; the club didn’t possess a full set of gym equipment, so Davidson – ever the innovator – made the players bring house bricks to training. Upon the commencement of the season, it seemed that Davidson’s efforts had reaped immediate rewards. North Hobart stormed out of the blocks, winning their opening 10 games and emphatically announcing themselves as the team to beat in 1987. In Round 11, they dropped their first match to Devonport, and made it two losses in a row when they were beaten by more than 10 goals by Glenorchy.

It was possibly the wake-up call the team needed, and in a sign of the group’s improved professionalism and maturity under Davidson they responded superbly. The following week, the Demons triumphed over Sandy Bay in horrible conditions, and from that point on they did not put a foot wrong. North Hobart won their final six roster games by an average margin of 71 points, which
included 125 and 121-point wins over Burnie and South Launceston. A 16-2 record saw the Demons finish two games clear on top of the ladder to take the minor premiership, the club’s first since 1969. After a week off at the start of the
finals, North Hobart faced Glenorchy in the 2nd Semi Final, and after a slow start they gradually put the foot down to win by 41 points and advance to the Grand Final.

Glenorchy then defeated Clarence in a tight Preliminary Final to set up a re-match with the Demons the following week. Both sides went into the match with a great deal on the line: for North Hobart, victory would mean a first premiership in 13 years, while Glenorchy – as two-time defending premiers – were aiming to complete the first premiership hat-trick in club history.

The two teams faced each other on September 12th in front of a packed North Hobart Oval crowd of 17,094; this was a superb attendance given the reduced capacity of the ground, with the Letitia St Stand having been lost in an arson attack earlier in the season. As had been the case in the 2nd Semi, Glenorchy jumped out of the blocks early, kicking five goals to two in the opening quarter.
However, North Hobart responded in emphatic style, slamming on a TFL Grand Final record of 11.3 in a second quarter blitzkrieg to take a 19-point lead into the main break. The Demons were never seriously challenged again, and continued
to press home their advantage in the second half, eventually cantering away to win by 52 points, 23.20 (158) to 16.10 (106).

The hero for North Hobart was Peter Hardman, who in his best game for the club booted seven goals in a dominant display at Full Forward. Fellow forward Steve McQueen was also at his elusive best, his five goals taking his season tally to 80 and into a three-way tie
with Paul Dac (New Norfolk) and Wayne Fox (Hobart) as the season’s leading goal-kicker. In defence, young Full Back Simon Minton-Connell gradually got on top in his battle with David Pearce, while David Guley was a rock at Centre Half Back and was voted as Best on Ground by the ‘World of Sport’ team.

However it was through the middle where the Demons won the flag: the midfield brigade of Darren Davies, Darryn Perry and Mick Elmer simply out-ran and out-tackled their experienced Glenorchy opponents, while the second quarter move of Ross Christensen from Centre Half Forward into the ruck was seen by many as a pivotal moment. The scenes of jubilation post-siren from the North Hobart
supporters were a sight to behold – their 13 years in the football wilderness had finally come to an end.

For many, the 1987 premiership was the first step on the road to further success: two players – Darryn Perry (1993) and Michael Maple (1994) – would go on to win the William Leitch Medal as TFL Best and Fairest, while four others – Bradley Plain, Simon Minton-Connell, Darren Davies and David Noble – were eventually recruited to the VFL/AFL; a fifth (Steve McQueen) was also drafted but opted to stay in Tasmania. Most importantly however, 11 of the 20 men that day would enjoy the thrill of being multiple premiership players, with North Hobart going on to claim further TFL flags in 1989, 1991 and 1992 in one of the proud club’s greatest eras; the latter two flags would be coached by Davidson’s successor Mark Yeats, yet another ex-Geelong player.

These subsequent premiership years would see the emergence of yet more young stars, with Daryn Cresswell and Paul Williams in particular going on to enjoy stellar careers at the highest level.

The first great side of the state-wide era, the North Hobart team of 1987 set the benchmark for all TFL/TSL teams who followed, and in the subsequent 30 years it’s a benchmark very few have reached. That fact by itself makes them a team of historical significance, however arguably the greatest praise to be bestowed upon them is that many experts still consider the Demons under Garry Davidson to be
the greatest team ever to take the field in the famous red and blue. The North Hobart side of 1987 were – and remain – a Legendary Team, and are now officially acknowledged as such in the Tasmanian Football Hall of Fame.