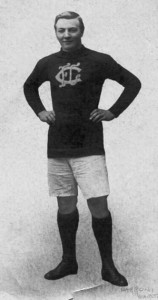 There have been 153 VFL footballers who have given their lives in the service of their country, and there would be very few more popular or respected by the football community than George David Challis. A wingman of supreme skill and athleticism, Challis had achieved a reputation as one of the finest footballers of his era by the time his career, and ultimately his life, were cut short by the First World War.

Challis was born and raised in Cleveland in the Tasmanian midlands, the oldest of eight children. An outstanding student, he received a scholarship to Launceston High School, and excelled both academically and athletically. He began his football career at the Launceston Football Club in 1909, and in his first season he made a huge impression, starring in the Blues’ NTFA premiership and representing the NTFA against the TFL for the first of what became three consecutive years. In 1911 he was selected to represent Tasmania at the second Australian Football Carnival in Adelaide, where he would emerge from the tournament as his state’s stand-out performer, winning the Bibby Trophy as recognition of that fact; this was no mean feat in a team containing other legends such as captain Jack Gardiner and champion full back Algy Tynan.

Challis’ performances at the carnival immediately caught the attention of every VFL club, and it was Carlton who swooped on the talented 22-year-old. Challis, who had graduated from university with a teaching degree and taken a position at his old high school in Launceston, saw the opportunity to enhance both his professional and sporting careers with a move to Melbourne, and so relocated to Victoria, making his VFL debut for the Blues in the first match of 1912. He would play all 20 games for the season, including the Blues’ shattering four-point preliminary final loss to Essendon, and would also gain representative honours as part of Victoria’s interstate team. By season’s end many observers were heralding him as one of the best players in the league, an especially impressive feat considering he had undergone the transformation from rover/half forward flanker to a wingman of singular prowess. While his skills dazzled any who saw him play, his outwardly friendly and pleasant demeanour added yet still to the young man’s popularity within the football community, leading some to dub him ‘Cheerful Challis’ and ‘Genial George’.

On field, Challis’ star continued to shine brightly through 1913-14. Unfortunately, the popular star missed the Blues 1914 premiership through injury, however the following year he was back and better than ever, and was reckoned by many to be best afield in the Blues’ 33-point premiership win over Collingwood. That success would turn out to be Challis’ 70th and final game for the Blues, as shortly after that triumph Challis was on a troop ship bound for the Western Front of the First World War. Ironically, if Challis has had his way initially, he would have missed the 1915 premiership as well – he had tried to enlist soon after the outbreak of hostilities, but had been rejected on physical grounds as some of his toes overlapped. Eventually, with the demands for fighting men reaching epic proportions, Challis’ minor physical ailment was overlooked.

As a member of the 58th Battalion, 1st Australian Infantry Force (AIF) he eventually rose to the rank of Sergeant, and was killed during the operation known as the Battle of Fromelles in March 1916, when he was the victim of a direct shell hit on his trench near the village of Armentieres. He was just 26 years of age. News of his death was met with shock and sadness in Melbourne, and with significant grief in his hometown of Cleveland. His loss was made even more profound by the fact that Challis had paid a visit to the local school before he had shipped out, departing with the promise, “When I come back, I’ll teach you boys the finer points of the game.”

George Challis was without question one of the most talented and popular footballers from Tasmania to have played the game at the highest level, and even a century after his death his name is still a revered one both within the Carlton Football Club and the Tasmanian football fraternity.