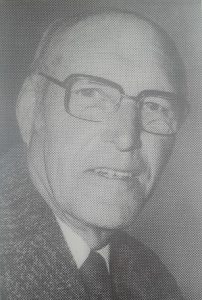 One of Tasmania’s most distinguished journalists, Keith Welsh reported on the game in Hobart, across the state and around the country for more than 20 years.

Noel Keith Welsh was born in 1905 in Benalla, Victoria. After moving to Albury in his youth, Welsh began his distinguished career in journalism with the Albury Daily News, and later the Border Morning Mail. After further stints in Melbourne (Melbourne Star) and Wagga Wagga (Daily Advertiser), Welsh enlisted in the RAAF during World War II; he rose to the rank of Flight Lieutenant during his time in the service, which included a three-year posting to India. After his demobilisation in 1945, Welsh returned to Melbourne to work for General Motors Holden, writing for the company magazine at a time when GMH was in development of its first Australian-built car, the ‘Holden’. Welsh longed to return to ‘real’ journalism however, and after relaying this desire in a 1946 Christmas card to The Mercury editor Ken Ready (an old RAAF colleague), Welsh was offered a position in Hobart.

Over the following 23 years, Welsh served The Mercury as its chief football scribe, writing under his famous nom de plume ‘Drop Kick’. During what many consider to be the halcyon days of Tasmanian football, Welsh reported on all TFL, intrastate and interstate matches of the time, covering performances by many of the greatest names the state has produced from Leedham and Eaton to Hudson and Leo. He was well-respected by all within the football fraternity, though inevitably his profession occasionally raised the ire of some of football’s more one-eyed individuals. He would regularly ‘cop a spray’ from the ladies in the Ryde Street Stand at North Hobart Oval as he left the ground after phoning in his post-match report; his response was always the same – a simple tip of the hat before carrying on without a word. Welsh’s dedication to the game was recognised when he was the recipient of a TFL Merit Award in 1964.

In addition to his football work, Welsh served The Mercury in a number of other roles: during the summer months he was The Mercury’s chief cricket writer under the name ‘Third Man’, while away from sport he performed duties at various times as sub-editor and civic, parliamentary and general roundsman. In an era when local journalists lived perhaps a little more in the public eye, Welsh enjoyed a stellar reputation. His journalistic integrity and good judge of public opinion meant that his own opinion was regularly sought, most notably by then-Tasmanian premier Eric Reece, who made regular Sunday morning telephone calls seeking Welsh’s take on the mood of the public regarding proposed laws and the government’s general performance. Welsh’s dedication to journalism extended beyond his written work, having the distinction of being the longest-serving treasurer of a state branch of the Australian Journalists Association. In recognition of his contribution to his profession, the Keith Welsh Media Award has been awarded annually since 1979 for the ‘Most Outstanding Contribution’ to the craft by a Tasmanian journalist.

Welsh retired from full-time journalism in 1970. Keen to maintain an involvement within the game he loved, Welsh joined the Tasmanian Football League Umpires Association in 1971 as chairman of the Umpire Appointment Board; it was his final official football role, stepping down at the end of 1978. He remained a passionate football fan for the rest of his life, following the game – and especially his beloved Essendon – with great fervour; he was particularly delighted when then-Essendon coach Kevin Sheedy surprised Welsh with a phone call at his 100th birthday celebration in 2005. He remained mentally sharp until well past his centenary, able to recall dates and figures with remarkable accuracy.