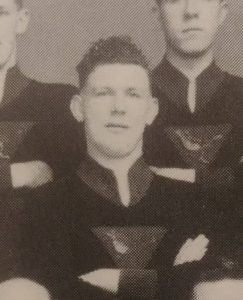 An outstanding ruck-rover for nearly 15 years and a charismatic and popular leader, Raynor Summers was one of the most versatile and talented footballers of his era, playing a major role during North Launceston’s period of dominance in the late 1940’s.

Raynor Summers was born in 1927 and made his senior debut for North Launceston in 1945 as a 17-year old. Known to everyone in the football fraternity as ‘Rattler’ as a result of his first job as a kitchen hand, his talent had soon attracted attention from the mainland, and he underwent a trial with Melbourne before opting to remain in Tasmania. Despite his age, Summers was soon a star performer with the unstoppable North Launceston sides under Gavin Luttrell, forming a magnificent following division alongside Bert Chilcott and Noel Atkins. Summers would play in four consecutive NTFA premierships from 1946-49, with two of those flags (1947 and 1949) also leading to state titles, while his own individual form was also outstanding, winning NLFC’s Best and Fairest award in 1948, and being chosen to represent his state at the 1947 National Carnival in Hobart.

With Summers and North Launceston seemingly at the peak of their powers, the 23-year old stunningly left the club ahead of the 1950 season to become captain-coach of East Devonport in the NWFU. He spent only one season on the north-west before returning to North Launceston in 1951, where he would win his second club Best and Fairest award. His return was only brief however, and in 1952 Summers was back at East Devonport, this time staying for three seasons. During his second stint, East Devonport had fallen on much harder times than during their golden era of the late 1940’s, but one bright spot of Summers’ tenure was taking out the NWFU goalkicking award in 1954 with 38 goals.

At the end of 1954, Summers departed East Devonport for the final time, and went home to North Launceston, who had called on his services as coach after a serious injury had stricken original captain-coach Jim Ross. Summers remained at the club after Ross’ return, ultimately retiring at the conclusion of the 1958 season after 170 games for the Robins.

A larrikin of the first order, ‘Rattler’ was known for some legendary pranks. Perhaps his most famous – or infamous depending on your point of view – occurred in 1956 ahead of the NTFA Preliminary Final at York Park. North Launceston was due to play an obviously superior Longford side, and to add to the Robins’ woes several key players were unavailable due to minor injuries. With the York Park surface already extremely wet and heavy underfoot after substantial mid-week rainfall, Summers realised that if the ground were unfit for play the match would be suspended, thus allowing his injured teammates some extra recovery time. Summers – with some help – proceeded to leave hoses running all over the ground overnight, and by the morning of match day the ground was “like a lake…. with wild ducks over by the scoreboard.” As he had hoped, the match was postponed until the following weekend, and the extra time allowed many of his injured colleagues to recover. The ploy ultimately worked, with North Launceston defeating Longford by eight points, although perhaps karma caught up with Summers in the end, as the Robins were beaten by City in the Grand Final two weeks later.