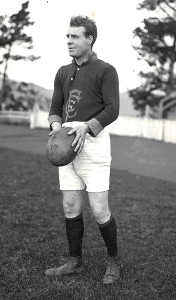 Very few individuals can have made a more lasting contribution to Tasmanian football in the first half of the 20th Century than John Carlton ‘Jack’ Gardiner. Born in Victoria in 1881, Gardiner first played the game for St Jude’s in Melbourne in 1900, before following the family tradition and joining Carlton, where his father John Snr and brother Vin both forged fine careers; his father in fact had been the first ever Victorian colonial team captain in 1879. Jack managed 16 games in two years at the Blues, but at the end of 1902 he made the switch to Melbourne, where he would play 69 games from 1903-07 and become a mainstay of the Redlegs’ midfield.

In early 1908, Gardiner was invited to Tasmania by the TFL to become an umpire and to coach the Tasmanian state side at the inaugural National Football Carnival in Melbourne, and so after one final game for Melbourne, Gardiner relocated south. The move was an unmitigated success: under Gardiner’s leadership Tasmania claimed the Division Two title at the Carnival, a monumental achievement, and on the back of that success, Gardiner remained in Tasmania, resuming his playing career as captain of Cananore in 1909. The Canaries had only joined the TFL as a senior club the previous year and had failed to win a single match, but the arrivals of Gardiner and super coach Bruce Carter heralded the start of a golden era, with the club winning not only TFL premierships in 1909 (undefeated), 1910 and 1911, but also the first three contested state premierships in those years as well. 1911 also brought Gardiner’s first on-field involvement with Tasmania at a National Carnival as he captained his adopted state at the carnival in Adelaide. Tasmania recorded a very creditable third place finish, largely on the back of a thrilling five-point victory over Western Australia. After yet another league/state premiership double with Cananore in 1913, Gardiner was appointed for a second time as Tasmania’s coach, this time for the 1914 Sydney Carnival, where Tasmania would win only one of their five matches (a 78-point victory over Queensland.)

WWI put football in the state on hold from 1916, but Gardiner was determined to keep some level of football competition alive in Hobart, and as such was instrumental in the founding of the three-team association consisting of the City, IXL and Artillery teams. By the time TFL competition was fully re-established in 1919, Gardiner – now aged 38 – was not expected to return in a playing capacity for Cananore. Amazingly he did just that, this time as captain-coach, and led the Canaries to two more TFL/state premiership doubles in 1921 and 1922. At the end of 1923 Gardiner moved to become captain-coach of North Hobart, and spent two years at the Redlegs before finally retiring – aged 44 years and four months – after North Hobart’s 53-point loss to his old side Cananore in the 1925 TFL grand final.

After retirement Gardiner served many clubs in varying coaching and administrative roles. Coaching stints at Kingston, New Norfolk, Hobart High School, Friends School, St Virgils and Cananore seconds only enhanced his reputation as one of the finest football minds in the state. Likewise, his administrative career – which had begun with periods on Cananore’s committee during his playing days – took him to roles as Secretary of the Hobart Football Club after WWII, as well as heavy involvement in both the North Hobart and Cananore Old Players Associations. After more than half a century in the game Gardiner retired in 1955 aged 72, and passed away in Hobart aged 84 in 1967.