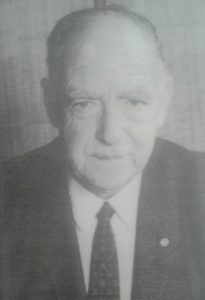 During the first half of the 20th century, Tasmania’s north-west coast faced a constant struggle for recognition as an equal power within the state’s football landscape. No person gave more of themselves to that fight than Gavin O’Dea, without doubt one of the strongest leaders and most influential administrators in the history of Tasmanian football.

Born in Devonport in 1906, Gavin O’Dea played school football with St. Patrick’s College (Launceston) and St. Virgil’s College (Hobart) but had very little – if any – involvement with the game over the following 20 years. After managing the Renison Bell Tin Mine near Rosebery during WWII, O’Dea returned home to Devonport in 1946, and it was here that his career in football administration began when he was appointed Chairman of the Eastern Conference of the NWFU in 1947. As Chairman, O’Dea’s greatest achievement was the reunification of the NWFU into a single competition in 1951, something for which he was acknowledged as the primary instigator. Already a respected figure thanks to his noted impartiality as Chairman, O’Dea was elected the first President of the newly-reunified league.

From his earliest days with the Union, O’Dea was a passionate advocate of the north-west coast; in particular his belief that the region should be an equal partner within the Tasmanian football community, engaging in many a stoush with representatives from other leagues – particularly the TFL – to this end. O’Dea’s primary argument was that good local players should be able to remain with their jobs and families on the coast, rather than be forced to relocate to Hobart if they wished to play top-level football. Eventually, O’Dea’s years of tireless persistence paid off, and from the early-1950s the NWFU received the acknowledgement it deserved: in 1950, the NWFU premiers were invited to contest the State Premiership for the first time, while the following year the Union was permanently admitted into the annual ‘Jubilee Shield’ intrastate series, playing four matches a year against TFL and NTFA combined teams. It didn’t take long for the ‘Coasters’ to vindicate their admittance: in 1953 the Union team – possessing local stars such as Arthur Hodgson and Lindsay Webb – twice defeated the TFL to claim the mantle of Tasmania’s premier football competition, while two years later Ulverstone defeated NTFA premiers Longford at York Park to become the first NWFU side to win the State Premiership.

As well as his dedication to the NWFU and the coast as a whole, O’Dea also cared passionately about the welfare of the individual, mentoring countless players across the coast. When 16-year old Darrel Baldock played his first match for the NWFU in Hobart in 1955, O’Dea personally drove him to the match and looked after him, helping to forge a life-long friendship between the two men. O’Dea was also instrumental in helping coastal great ‘Paddy’ Martin establish himself in business after Martin’s playing career ended in 1960. In addition, O’Dea attended many Tasmanian interstate matches in support of the north-west players who were involved.

In 1962, the demands of O’Dea’s job as Master Warden of the Devonport Marine Board forced him to give up his official (but voluntary) role with the NWFU. He was not lost to the game however, serving as NWFU vice patron and then patron for more than a decade. He continued to fight for the north-west in many areas until his untimely death aged just 67 in 1973. Prior to his passing O’Dea’s tireless work for the benefit of the north-west had been acknowledged with NWFU Life Membership (1949), an ANFC Merit Award (1962) and an MBE for Services to the Community and Sport (1960).