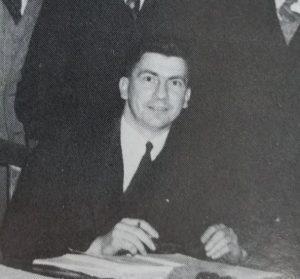 One of the most brilliant and dedicated administrators in the long history of Tasmanian football, Don Clark was born in Hobart in 1914 and educated at Hobart State High School. A talented cricketer as a young man, he represented Tasmania twice against the touring Englishmen in 1946/47, taking the wickets of such esteemed names as Denis Compton, Bill Edrich and Norman Yardley. Clark’s football career was rather less illustrious, playing Seconds football with Lefroy for much of the mid-to-late 1930s. By 1940 he was an occasional senior player for the Blues as a half back flanker, however it was off the field where Clark would really make his mark on the Tasmanian football landscape.

After hanging up his boots at the end of 1940, Clark stepped straight into football administration, taking up the role as secretary of the TFL committee aged just 27. Shortly afterwards, the TFL was forced into recess due to WWII, at which point Clark played a key role in the formation of the United Services Association, a successful three-year competition which ensured that football remained active in the city. As it became clear that the war was coming to an end, Clark was at the forefront of getting the TFL competition up and running again in 1945, as well as its reformation along district lines. In 1950, Clark was joined on the committee by another ex-Lefroy player in Merv McNeair when the latter was elected TFL President; the duo would go on to run a highly-effective TFL administration for the next two decades.

During his tenure as secretary, Clark introduced many measures which inestimably improved the TFL competition, including the Ground Improvement Fund, the Players Provident Fund and the TFL Standing Committee. His administrative and organisational skills were legendary, most notably evidenced by his organisation of both the 1947 and 1966 National Carnivals held in Hobart; the 1966 edition was a particular triumph, as – even without a sponsor – the event still managed to turn a handsome profit. Such successes saw Clark held in high esteem both at home and interstate: he served as Tasmania’s delegate to the Australian National Football Council for many years, while he was also sought out to chair three conferences between the nation’s three major leagues: the VFL, SANFL and WAFL.

Away from football, Clark was a prominent member of the Hobart business community. A licensed auditor and a Justice of the Peace, he somehow found time around his extensive football duties to serve as a City of Hobart alderman during the 1960s. He also served as secretary for many other organisations, including the Master Butchers Association.

After more than three decades at the forefront of Tasmanian football, Clark stepped down from his role as TFL secretary at the end of 1973, his 32-year tenure being a TFL record. His contribution to the game was duly celebrated, with the NWFU bestowing upon Clark its Extraordinary Certificate of Merit Award the following year. The best summation of his contribution however came from his comrade Merv McNeair, who stated “In my humble opinion never before has any dedicated football administrator given so much for so little return to the development of our code….”