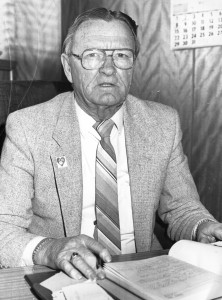 Jack Hill was one of northern football’s most respected figures, serving the game in multiple roles for more than half a century. Born in 1918, Hill began his playing career with Launceston seconds in 1937, and made his senior debut for the club the following year. Primarily a wingman or centreman, Hill found it difficult to break into the powerful Launceston combination of the era, and as a result played only five senior games before the NTFA entered into a WWII-enforced recess from 1942. Hill enlisted during the conflict, rising to the rank of Lance Corporal before being discharged in 1942. During the conflict, Hill continued playing football in the Northern Patriotic Association with the Essential Services team, winning a premiership in 1943 before resuming with Launceston upon the NTFA’s reformation in 1945. A regular senior player for the first time, Hill sadly missed the Blues’ 1945 senior premiership through injury, at which point he dedicated himself fully to his role as coach of the seconds which he had also taken on that season. Hill was a consistently fine performer with the seconds throughout his 11-seasons with Launceston, regularly named in the best players and taking out the seconds’ Best & Fairest award in 1948. His leadership ability was also recognised from outside the club, captaining an NTFA Seconds combination that defeated a TFL Seconds team at York Park in 1948.

Keen to maintain an involvement in the game after his playing retirement in 1950, Hill moved immediately into umpiring, joining the NTFUA as a field umpire. As well as taking charge of NTFA seniors and seconds matches, Hill umpired in many of the numerous different competitions under NTFUA jurisdiction, including the North-East Union, Esk, Midlands and Fingal District Associations, the North-East Union and even as far away as the Circular Head Association on the far north-west coast. Highly regarded by players and his peers, Hill oversaw many finals matches (including Grand Finals) as well as representative and state fixtures. By the time he hung up his whistle in 1961, Hill had officiated in more than 300 matches, his efforts seeing him bestowed with Life Membership of the NTFUA.

In 1962 Hill joined North Launceston as a member in support of his son John, who had joined the Robins as a player. Initially serving the club as a volunteer and sponsor, Hill later spent two years as coach of North Launceston’s U19s side, guiding them to a premiership in 1970. By 1975, Hill had risen to the position of club president, a position he would hold for the next 15 years. During his tenure North Launceston re-established itself as a powerhouse of northern football, breaking a 12-year premiership drought in the seniors and winning a total of 16 NTFA premierships (six seniors, six reserves and four U19s). In 1986, Hill donated his administrative skills to the broader football world when he became one of the inaugural directors of the new TFL Statewide League, of which North Launceston was an original participant.

After 52 years of uninterrupted service to Tasmanian football, Hill retired in 1989 due to ill-health. His contributions to the game were recognised many times: in 1986, Hill was the recipient of an ANFC Merit Award, while in 1990 North Launceston acknowledged his 27 years of service to the club by renaming the seniors Best & Fairest award in his honour. A football tragic to the last, Jack Hill passed away in 1991 at the age of 73.