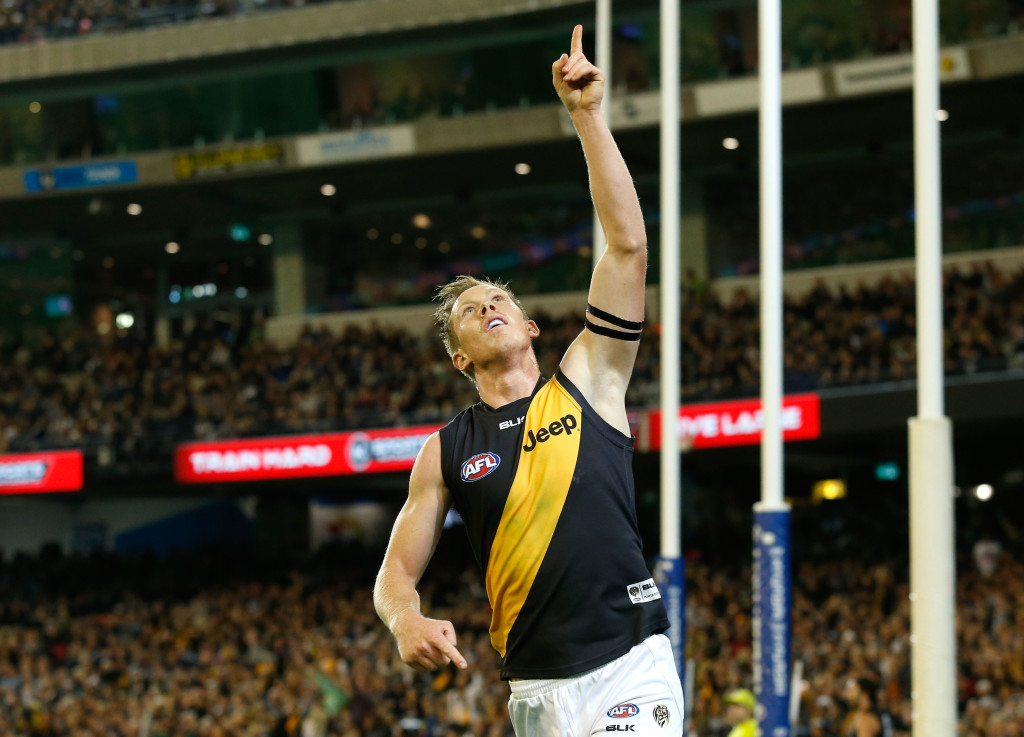 Hailing from a famous footballing family, Jack Riewoldt made his senior debut for Clarence in 2005, aged 16. By season’s end he was regarded as a future superstar thanks to a stunning finals series, with four goals in the Grand Final and five the previous week. The trend continued the following year, with three standout performances at the U18 Championships, senior VFL games with the Tasmanian Devils and a premiership medal with
Clarence.

The talent was obvious, and Riewoldt was selected by Richmond with Pick 13 in the 2006 National Draft. After three seasons finding his feet at AFL level, Riewoldt’s breakout year was 2010, a season in which he claimed Richmond’s Best & Fairest, the first of two All-Australian jumpers and the Coleman Medal as leading goal-kicker in the H&A season, Richmond’s first since fellow Tasmanian Michael Roach in 1980.

A second Coleman followed in 2012, and Riewoldt was now entrenched as one of the AFL’s premier spearheads, with his strong hands, superb leap and deadly accuracy making him a nightmare for opposition defenders. Sometimes maligned in his early days, Riewoldt gradually matured into a fine leader on and off the field, to the point where he stated that he was happy not kicking goals if it meant team success. It’s no accident that Riewoldt’s maturity coincided with Richmond’s best performances in 30 years, as he was a member of the Tigers teams that played in three consecutive AFL finals series’ from 2013-15.

In 2017 Riewoldt was appointed Richmond vicecaptain, and in that capacity played a vital role in the Tigers’ droughtbreaking
premiership victory over Adelaide; Riewoldt’s performance in the Grand Final was superb, taking two towering marks early in the first quarter and setting the tone for Richmond’s approach to the match – relentless attack on the ball and the opponent. To the end of 2017, Riewoldt’s 537 goals are sixth all-time for Richmond, and he’s topped the Tigers’ goal-kicking list for eight straight seasons.

His record already makes impressive reading, and it’s likely that it will only look better by the time he retires.