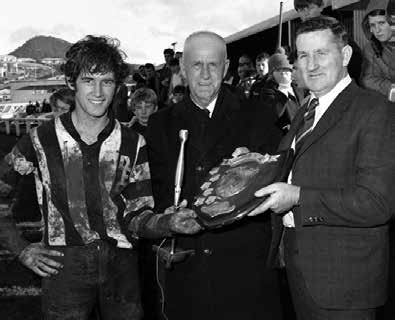 Born in Victoria in 1908, Greg Moline’s first involvement in football came through umpiring. After receiving coaching from legendary umpires Ivo Crapp and Jack Elder as a teenager, he subsequently umpired matches all over Melbourne and country Victoria for the next 15 years, and even coached umpiring himself during the 1930s. In 1939, Moline relocated to Tasmania
as umpire coach for the NWFU and Queenstown Association, while also taking his first steps into football administration with roles as QFA President and tribunal chairman. In 1945 Moline moved to Burnie, umpiring his final match in 1946 before focusing his attention on football administration.

Moline’s first administrative role in coastal football came as delegate to the NWFU for the APPM Football Club. After the club was voted out of the union in 1950 in favour of community based clubs, Moline spent the following 25 years administering the development of the NWFU through its golden era of the 1950s and 1960s, and proved an instrumental figure in the unification of coastal football.

Moline served in many different roles within the NWFU and his adherence to strict discipline around behavior and fair play saw him earn the nickname of ‘Sheriff’. An astute and dedicated leader and administrator, Moline fought to retain the union as an equal partner in Tasmanian football, as well as to retain people on the coast. The result was the north-west region receiving long overdue inclusion in many top-flight Tasmanian football fixtures, most notably the chance for the NWFU premier to contest the official State Premiership.

After 20 years of distinguished service, Moline became NWFU president in 1967 and he passed away nine years later while still in office. Outside football, Moline was a highly-regarded athletics coach and boxing administrator, and in all he gave dedicated service to sport in north-western Tasmania for more than 50 years. However it was to football to which he was most dedicated, recognition of which came with Life Membership of the NWFU and a prestigious ANFC Merit Award in 1969.