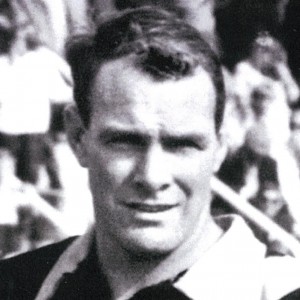 Whether it was in the middle of the ground, in the backline or as a forward, there was very little on a football field that Mal Pascoe could not do. After starting his journey in 1949 climbing through the age ranks with Essendon, it took until 1953 for Pascoe to make his senior debut for the Bombers. In 94 games over six seasons with Essendon, he built a reputation as a tough and skillful ruck-rover/resting defender – sharing a spectacular partnership with 224-game champion Hugh Mitchell in that role – and became noted especially for his fearlessness in defence, his strong overhead marking and his drop kicks which were widely acknowledged as some of the best in the VFL. Pascoe played an important role in the Dons rise to the VFL Grand Final in 1957 when he was named best player in their second semi final triumph over Melbourne, but they were overwhelmed by the Demons at the final hurdle.

In 1959 he departed Essendon bound for Tasmania as captain-coach of the Hobart Football Club, where he switched to the forward line and made an immediate impact; in fact, very few individual debut seasons in the history of Tasmanian football can have been as impressive as Pascoe’s: in 1959 Pascoe led the TANFL goal-kicking list with 75 and tied with Sandy Bay’s Murray Steele to win the William Leitch Medal as competition Best and Fairest, all before leading his side to a thumping league Grand Final win over New Norfolk and followed that up with a state premiership triumph against Burnie. It was the beginning of a period of strength for Hobart, with the club achieving further premiership success under Pascoe in 1960 (when he again led the league goalkicking with 57), 1963 and 1966, only heightening the acclaim in which Pascoe was held as a coach. He retired as a player at the end of 1966, having relinquished the role of coach the previous year, going out on a high as one of the best afield in Hobart’s thrilling one-point Grand Final victory over Glenorchy.

After his playing days were over he made an unsuccessful bid to become Essendon coach in 1971 and then had a further two years coaching Hobart in 1978 and 1979. His contributions and legacy at the Hobart Football Club were confirmed when he was named as ruck-rover in Hobart’s ‘Greatest Team’ in 2002.