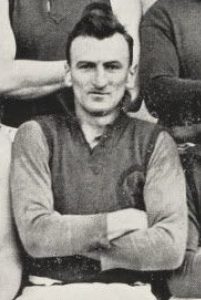 One of Tasmanian football’s most prolific goal-kickers in the first half of the 20th century, Col Stokes was born in 1905 into one of Longford’s most prominent sporting families, with his father Arthur, elder brothers Gordon and Bruce and nephews Raymond and Jervis all forging fine careers. Col first appeared for Longford in 1923 as a 17-year old, during the club’s period in various northern country competitions, and was a member of their Central Association premiership the following year. Right from the start the youngster displayed natural talent as a goal-kicker, however it wasn’t until Longford were admitted into the NTFA in 1926 that Stokes’ talent was truly recognised.

From the moment he booted five goals in Longford’s first NTFA match against City, Stokes quickly became one of northern football’s genuine stars. In his first season at the top level, he booted 5 goals or more on five occasions, passed the 50-goal milestone and topped the NTFA goal-kicking tally, a remarkable achievement in a year in which Longford won just one of 15 games. 1926 also saw Stokes receive his first NTFA representative honours, and on this stage too he was an instant sensation, booting 8 goals against the NWFU in a performance that had The Examiner raving that northern football had at last found a reliable goal-kicker. Stokes’ returns over the following seasons were even better, topping the NTFA tally again in 1928 and 1929 with 77 and 70 goals respectively; the former was, at the time, a Tasmanian record in club matches, though it would be bettered by North Hobart ace Alan Rait the following year.

Stokes was an extremely versatile player: his speed, outstanding marking ability and deadly accurate kicking were regularly put to good use in his craft as a forward, however he was far from a one-trick pony. From around 1930 Stokes’ role in the Longford team became more varied, playing as a centreman, wingman and even a defender on occasion. Such was his brilliance that he often shone in these positions, with his work in the centre being particularly praised. He was never too far away from the ‘sticks’ however, booting career best hauls of 9 goals in 1931 and 1933, and claiming a further club goal-kicking award in 1934. This lack of a consistent role saw Stokes’ representative appearances become more sporadic, however he generally made the most of the opportunities whenever they arose, most notably when he booted two goals against Victoria in 1932. He finished his career with 19 NTFA combined appearances across eight years, but unfortunately was never afforded the opportunity to represent his state at a National Carnival.

By 1935, the demands of Stokes’ job meant that he was often unavailable for much of the early part of the season, and as a result he managed only 24 games across his last three years of football. His final NTFA campaign came in 1937, and he signed off with one last season of brilliance: despite playing only 8 games, Stokes still managed 32 goals – including two hauls of 8 – to finish third in the NTFA tally and claim his sixth Longford goal-kicking award. He retired with more than 200 senior games and in excess of 500 goals to his credit in an outstanding career.