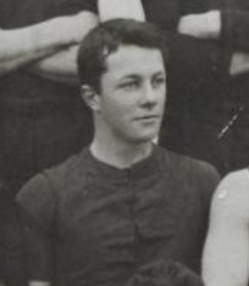 Colin Campbell was one of a number of Tasmanian players to make a significant impact on Victorian football in the pre-VFL era. The youngest of six sons, Campbell was born in the small northern Tasmanian town of Cressy in 1872. From a very young age it was obvious that he was a singularly talented sportsman, starring at Horton College, Ross in both football and cricket. By 1889 he was playing senior football with Launceston in the NTFA, and had also appeared in multiple Northern Tasmania sides in matches against the South. After unfortunately missing Launceston’s 1889 premiership, Campbell’s stocks continued to rise the following season, picked to represent Northern Tasmania in a fixture against VFA powerhouse Essendon. The Victorians were extremely impressed by the 18-year old, and when in early 1891 news reached the club that Campbell would be relocating to Melbourne to study medicine, Essendon were quick to extend an invitation to Campbell to play for them. It was an invitation that Campbell himself was only too happy to accept, and it soon became apparent that the move would be a mutually beneficial one. Debuting for the ‘Same Olds’ in early 1891, Campbell had before long stamped himself as one of the champion players in the VFA competition, with his exceptional pace, strength in contests, prodigious long kicking, and football smarts helping cement him in the Essendon line-ups of the early 1890’s, a combination that would annex four consecutive premierships from 1891-94. His skills also saw him represent Victoria in intercolonial football against the South Australians in Adelaide in 1893, the same season he was appointed as vice-captain to Alex Dick at Essendon. His reputation within the Victorian footballing fraternity is best shown however by the fact that he was often mentioned in the same breath as those players who made up the very top echelon of champions in that era, a group that included fellow Tasmanians George Vautin and Fred McGinis.

After six seasons with Essendon, Campbell retired from football at the end of 1896 aged just 24, however he was coaxed back into football late the following year, playing three games and taking a special place in history as a member of the very first VFL premiership team. He remained a player for the following two seasons, however he only made nine more senior appearances, and at the end of 1899 Campbell retired from football for good after more than 100 senior games. He was still only 27, but his contribution to and skill for the game of football was such that even as late as 1926 Campbell was still widely considered one of the top half-a-dozen footballers that Tasmania had ever produced. Post-retirement, Campbell immigrated to England to undertake the final part of his medical degree, and upon graduation he co-operated a practice at Winalton, near Newcastle on England’s north-east coast. It was here, in April 1907 that Colin Campbell died at the tragically early age of 35 after contracting pneumonia.