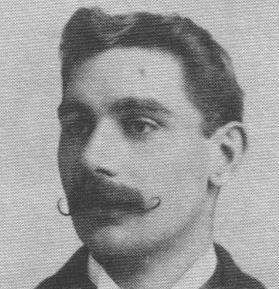 Spoken of by observers of the time as one of the most brilliant and skilful players to have ever played the game, George Vautin was one of a number of Tasmanian footballers to have made an impact in the embryonic Victorian competition during the late 19th century.

Vautin was born in 1869 in the small community of Orielton, around 20 kilometres north-east of Hobart. A formidable talent as a sportsman, and he began playing football with the old City club in Hobart as a young teenager, advancing through the ranks to the senior team in quick time and playing in a City premiership aged only 17 in 1886. The following year he was a member of the first Tasmanian team to visit Victoria, playing a number of matches in Melbourne against VFA side Essendon and other inter-colony teams, and it was in these matches that the wider football community began to speak of Vautin as a player of singular talent. A second premiership with City in 1888 was followed by duties in a further representative opportunities to Melbourne (1889) and New South Wales (1890), and it was at this time that Essendon approached him with an offer to play with them in Victoria, to which Vautin agreed.

Playing his first game for the ‘Same Old’ in 1891, Vautin was a member of the club’s four successive VFA premierships from 1891-94. The praise for the quality of Vautin’s play was widespread, with many observers describing his legendary elusiveness, guile and pure wizardry with ball in hand as simply a joy to behold and nearly unmatched in the history of the game. The famous sports writer ‘Old Timer’ from Sydney publication The Referee described Vautin as “the most brilliant player that ever graced a field”, that “he delighted onlookers for many years by his brilliant roving” and that “more effective players I have seen, but none were more pleasing to watch or possessed the grace and trickiness of Vautin.”

By the time of what came to be known as ‘The Great Schism’ – the split of the eight VFL clubs from the VFA in 1896 – Vautin was still a key member of the Essendon side, having won the Champion of the Colony award as the most brilliant player in the VFA in 1895. He was a member of the first VFL premiership team in 1897, and retired from football the following season aged 29, leaving a reputation as one of the finest talents in the early days of the code.

A talented all-round sportsman, Vautin was also a fine cricketer in both Tasmania and Victoria. His son Roy trained with Essendon in the late 1930’s but never played a game for the club. George remained in Victoria after his playing days were over, and died in West Preston in 1949 at the age of 79.