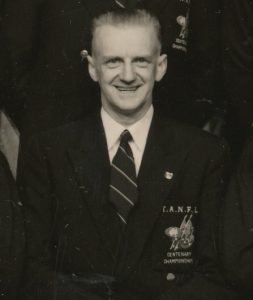 A passionate and dedicated administrator, Keith Dickenson was a prominent name in football circles for more than 20 years. Born in 1908, Dickenson was a talented junior footballer, representing Tasmania in a schoolboys match against Victoria in 1923. He later played senior country football with Granton and Bridgewater, and it was during this period that he embarked on his first administrative role, as a club delegate to the Southern Districts Football Association. After moving to Hobart’s northern suburbs and entering business in the late 1930s, Dickenson’s prominent profile within the community subsequently saw him approached to take up an administrative role with the New Town Football Club; although initially reluctant Dickenson eventually agreed, joining the club’s committee in 1946.

Over the following 23 years, Dickenson served New Town in many capacities including committee member, club delegate to the TFL, Chairman and President. During this period New Town enjoyed one of the greatest golden eras of any TFL team, claiming seven league premierships and three state flags from 1948-58; many players in these teams were recruited largely through the efforts of Dickenson, including Terry Shadbolt, Brian Eade and Lance Cox. Dickenson was also at the forefront of many important actions taken by the club off-field, most notably the relocation (and name change) to Glenorchy in 1957 and the associated redevelopment of King George V sports ground. The club’s new facilities were the envy of the TFL, and included the first football clubrooms in Tasmania to be granted a liquor licence, another endeavour in which Dickenson played a crucial role.

Dickenson was also a prominent figure on a state and national level: in 1947, he was appointed as manager of a TFL combined team which travelled to Queenstown, and would subsequently manage many TFL intrastate sides. He also managed two Tasmanian interstate teams, namely the sides that participated in the 1953 (Adelaide) and 1958 (Melbourne) National Carnivals. At home, Dickenson was integral in the expansion of the TFL with the admission of Clarence and New Norfolk in 1947 as well as the publishing and distribution of the TFL Record. He was also an ardent advocate for player welfare, opposing many interstate clearances for TFL players on such grounds and once publicly criticising a Hobart hospital for perceived delays in treating player injuries.

Dickenson stepped down from his various football roles in 1969, his contribution to football having previously been acknowledged with Life Membership of both the Glenorchy Football Club (1952) and the TFL (1960). He was subsequently recognised further with an Australian National Football Council Merit Award in 1987, as well as with induction into the Glenorchy District Football Club Hall of Fame in 2002. A long-serving and distinguished member of the community, Dickenson was honoured by multiple local associations and was awarded an Order of Australia Medal for Services to the Community in 1978.