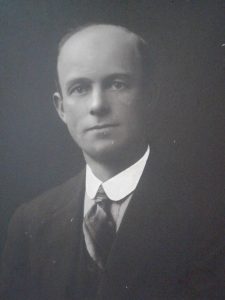 Ronald Tyson was arguably the most influential administrator in northern football in the first half of the 20th century. A tireless advocate for the game and in particular his beloved City Football Club, he was described as being “as much a part of (City) as the red and white guernsey itself.”

Born in Launceston in 1891, Ron Tyson’s first involvement in football came as a player for United St. Aidan’s in the Cornwall Association, playing with the club as they won three consecutive premierships from 1909-11. In 1912 he joined City in the NTFA to play with their Seconds team, beginning his lifelong association with the club; however it was as an administrator that Tyson would make his greatest mark in football. He had served as club secretary for St. Aidan’s during his time as a player, and upon joining City he took up the same role, one which he would perform with great dedication for the next 20 years.

Tyson’s most notable achievement during this period was almost certainly the recruitment of the legendary Roy Cazaly as coach of City in 1928, a move which transformed the club’s fortunes: “(City) finished on the bottom of the ladder in 1927 – I don’t think we won a game. So the club gave me, as secretary, an open cheque to go to Melbourne and find the best man I could to coach the side; I went straight to Cazaly’s home. When I saw him, he was looking so clean and neat in his red and white jumper, I fell for him straight away.” Under Cazaly’s guidance, City annexed the 1928 and 1930 NTFA and State premierships, triumphs which in the opinion of some laid the foundation for the next half a century of success which followed. Tyson would later rate Cazaly as the second greatest player to ever wear the red and white of City behind only Laurie Nash, who was himself recruited to City largely through Cazaly’s (and Tyson’s) efforts.

After two decades as City secretary, Tyson joined the NTFA committee in 1932, initially as an independent delegate. During his time on the committee he was an ardent advocate for the expansion of the association, being the chief mover in the admittance of Cornwall (later East Launceston) and in particular Scottsdale in 1948; he had earlier also been a key figure in the admittance of Longford in 1926. By the time the NTFA went into recess due to WWII in 1942, Tyson was serving as President of the NTFA Seconds Association, and upon its resumption four years later he was elected as Chairman of the NTFA committee, a post he would hold for seven years. Tyson’s final official role within the NTFA was a 10-year stint as Treasurer of the association, a role for which he was uniquely qualified thanks to his day job as General Manager of the Launceston Bank for Savings. During this period Tyson also served as a selector for NTFA combined teams, and later a selector for Tasmanian state teams for several years.

Outside of football, Tyson was an active member of the community in many walks of life. He was heavily involved in state cricket, managing three Tasmanian teams in tours to Victoria and spending several years as a member of the Executive Cricket Council of Tasmania. Away from sport, he served as treasurer or honorary auditor for numerous organisations such as the Launceston Players Theatrical Society and the Launceston Chamber of Commerce. By the end of his life, Tyson had been afforded Life Membership of no less than nine sporting and community organisations, and his contributions were officially acknowledged when he was bestowed with an OBE in the 1954 New Year’s Honours List.

After more than 50 years in football administration, Tyson stepped down from his position with the NTFA in 1962. He remained a devoted supporter of City for the rest of his life, and was delighted when in 1979 the club – now known as City-South – named their new clubrooms at Youngtown Oval in his honour.