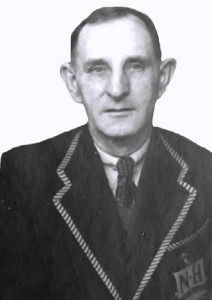 George D. Miller was amongst the most well-known administrators of both the North Hobart Football Club, and of southern football in general during the first half of the 20th century. Originally serving North Hobart as a player, Miller was a member of four league/state premiership teams with the Redlegs either side of the Great War, and represented Tasmania at the 1914 Adelaide Carnival. Upon his retirement, Miller became a highly-respected administrator, serving at different times as club chairman/delegate, a selector of both southern and state combined sides as well as a committee member and patron of the TFL/TANFL. He was however first and foremost a North Hobart man, described by contemporaries as “a man with one eye red and the other blue.” Miller’s contributions to North Hobart were acknowledged by both the North Hobart FC senior Best and Fairest award and the Ryde Street grandstand at North Hobart Oval
being named in his honour, while his endeavours in serving the game overall were recognised with an Australian National Football Council merit award in 1968.