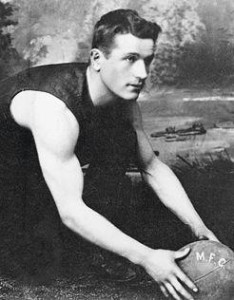 A rover of unparalleled skill and class, Fred McGinis could easily be described as Tasmania’s first true football superstar. Born in Hobart in 1874, McGinis began his career with City in the old Tasmanian Football Association, and had represented his native state on many occasions before crossing Bass Strait to play in the VFA in 1894. After trialling with but being rejected by Essendon, McGinis eventually found a home with the Melbourne Football Club and it didn’t take long for him to make his mark on the Melbourne football scene. In his second season in 1895, aged just 21, McGinis was named as the year’s best player by The Argus newspaper, and by the time the VFL was formed in 1897, McGinis was regarded by many contemporary observers as the finest player in the game. This was seemingly confirmed when he wrote his name in the history books as the winner of the ‘Champion of the Colony’ award in 1897, the unofficial pre-cursor to the Brownlow Medal.

Along with ruckmen Vic Cumberland and George Moodie, McGinis formed a potent following division that helped Melbourne defy all expectations and win the first VFL premiership of the 20th Century in 1900. Tragically, McGinis’ somewhat frail body (he had always been somewhat injury prone) would cut short a magnificent career. After 15 games in 1901, McGinis’ eyesight began to rapidly deteriorate at the age of just 27, forcing him to retire and return to Tasmania. The football world was deeply saddened and in a sign of just how much respect he was afforded by the Melbourne football fraternity, the VFA and VFL agreed to play each other in a benefit match for the stricken champion; this was an enormously significant event at the time, as the two competitions were still bitter rivals after the 1897 splintering which had led to the birth of the VFL. The match raised £200. McGinis’ sight did eventually improve enough for him to run a successful business in Hobart for many years, while he also remained involved in the game he helped to pioneer, serving as a trainer with Cananore. McGinis passed away in Hobart aged 78 in 1953, and 55 years later he was honoured by Melbourne with selection as one of their ‘150 Heroes’ as part of the club’s 150th anniversary celebrations.