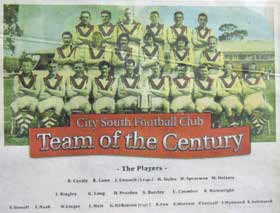 The 2018 induction into the ‘Great Club’ category of the Tasmanian Football Hall of Fame is the South Launceston Football Club, and the two clubs who merged to form it: City-South and East Launceston.

Formed in 1879 as the Cornwall Football Club, City assumed their more familiar name the following year. The club played its first regular senior football upon joining the Northern Football Association in 1883, and had the distinction of winning the competition’s inaugural premiership. A formation member of the NTFA in 1886, City quickly established themselves as aconsistently strong club, and by the outbreak of WWI it boasted 13 senior premierships, making it the most successful senior football club in
Tasmania. City’s record as a powerhouse continued into the between-thewars period, with the Redlegs claiming a further seven premierships between 1921 and 1941. During this era the club boasted a number of outstanding players and coaches, none greater than the iconic Roy Cazaly. A veteran of more than 200 VFL club and representative games, Cazaly was recruited to the club as playing coach in 1928, largely thanks to the tireless efforts of club secretary Ron Tyson.

The coup was not only an indication of Tyson’s influence, it also demonstrated City’s wealth and cachet as a club, with Cazaly’s services as coach having previously commanded salaries of up to
£12 per week, an enormous sum for the time. In three seasons as coach, Cazaly helped City claim the NTFA-State premiership double in 1928 and 1930, and his impact in that time was so pronounced that many view him as having laid the foundations for the next 40 years of sustained success which followed. Equally prolific at this time was a young champion named Laurie
Nash – a star for City at Centre Half Back, Nash was twice voted NTFA Best & Fairest, and later went onto great fame as a member of South Melbourne’s ‘Foreign Legion’ teams of the mid-1930s. Other notable players for City during this period included great Full Back Len Lewis, and champion ruckman Jock Connell, a regular NTFA representative for nearly a decade.

East Launceston, by contrast, enjoyed a far less prolific early history. Also founded as Cornwall Football Club, the Demons entered the NTFA as one of two ‘expansion’ sides (along with Scottsdale) in 1948. Amazingly, the club had only been formed one year earlier – out of, according to club great Peter Webb “all the players that nobody else wanted” – and had never played in any other competition before joining the NTFA. Given their unusual origins, Cornwall’s early fortunes were predictably mixed, with their first four seasons
producing two wooden spoons and two finals appearances, their best finish being a Preliminary Final in 1951. Despite possessing some very fine players such as Laurie McGee (dual NTFA Best & Fairest) and champion goal-sneak Roy Ringrose, Cornwall couldn’t find a way to become consistently competitive, and finished at or near the bottom of the ladder for most of their first decade. Fortunes didn’t improve after a name-change to East Launceston in 1958, and by the early-1960s there were still no signs that the club was on the verge of any significant improvement.

Commendably, this lack of success did nothing to dampen the spirits of those around the club, with East Launceston earning a reputation as a club to which their players, fans and administrators displayed unwavering loyalty, all certain that success was just around the corner.

That success finally arrived in 1967 with the appointment of Brian Lowe as captain-coach, a former City and Geelong ruckman who had something of a ‘Midas Touch’ as a coach. Capitalising on three years of development under his predecessor Chris Pavlou, Lowe led the Demons to their highest finish after the roster season (2nd) in his first season in charge, and ultimately succeeded in guiding the
club to their first – and ultimately only – NTFA premiership with a two-point victory over North Launceston, 9.12 (66) to 8.16 (64). The Demons subsequently enjoyed the only period of sustained success in their history, qualifying for another Grand Final in 1969 (losing to Launceston) and playing finals every season from 1967-72.

Meanwhile, the post-war period had been one of great bounty for City: in 1951, the club appointed former Fitzroy centreman Bob Miller as captain coach, and over the next seven years he guided the Redlegs during what is widely regarded as the club’s greatest era, claiming four premierships in seven seasons, including a hat-trick from 1952-54. In 1957, the desire for more district-based football saw the club become known as City-South, and under their new name the Redlegs claimed back-to-back premierships in 1959-60 under Stan Morcom. The 1960 season was a particularly satisfying one for City-South, as not only did the club ‘clean sweep’ all three NTFA
divisions (seniors, reserves & Under-19s) but it also went on to annex the State premiership with a hard-fought win over Burnie.

During this period the Redlegs boasted many exceptional players who became household names across Tasmania, most notably champion Centre Half Forward Geoff Long.

The club also unearthed a number of young stars who would have celebrated careers at VFL level, including Verdun Howell (St. Kilda) and Berkley Cox (Carlton). City-South also developed Ian Drake, club secretary during the mid-50s who later performed the same role with St. Kilda for more than 30 years. In this role Drake was integral in the club’s recruitment of many young Tasmanians, most notably Darrel Baldock and Ian Stewart.

City-South continued to experience regular success throughout the 1960s: now coached by Graeme ‘Dreams’ Wilkinson, City-South claimed the NTFA premiership in 1962 to make it seven flags in 11 years. In 1965, City-South relocated their home base to Youngtown Oval in Launceston’s southern suburbs, and they celebrated the move in the best possible way the following year, winning the NTFA flag before going on to annex State premiership number six with a famous win over Hobart. In 1970, Bob Miller returned as coach and quickly showed that he had lost none of his genius by guiding the team to yet another premiership in 1972. This triumph is particularly fondly remembered by City-South faithful, as it led to the club’s seventh State triumph, achieved through victory over the great Darrel Baldock-led Latrobe
team. After 25 years of unprecedented success, City-South’s 30th and last NTFA premiership came in 1974.

By 1986, both clubs were in trouble. East Launceston was one of two NTFA teams to join the TFL in the league’s first season as a state-wide competition, however their early performances were largely uncompetitive. Meanwhile City-South – who had remained in the NTFA – was on the brink of financial ruin due to debts on outstanding loans from the State Government and St. Leonards Council.

It had been suggested that the situation could be salvaged if City-South entered into a merger with another club, and East Launceston
had been receptive to the idea, with club president George Brooks – a St. Leonards Council member – promising to try and negotiate the forgiveness of City-South’s debt should the merger go through. With financial security achievable, and a vote of City-South members regarding the merger coming back positive, it was agreed in May that City-South and East Launceston would merge to form the South Launceston Football Club; the new entity adopted colours of red, white and blue (combining those of their parent clubs), and took on the nickname of the ‘Bulldogs’.

The club’s first official match came on May 24th, with the NTFA team going down to George Town by 56 points, and continued to field senior teams in both the NTFA and TFL for the remainder of the season. While the TFL side only won one further match, 1986 did bring the new club its first piece of silverware, claiming the final NTFA Reserves premiership. The following season, the NTFA and NWFU went into recess and the regional NTFL was formed, while South Launceston moved fully into the TFL.

South Launceston’s initial run in state-wide football was unsuccessful: despite at various times fielding players the calibre of Ian Paton and Dale Weightman, the Bulldogs failed to make the finals in 12 seasons of TFL football. With on-field success at a minimum, financial pressures mounting and the continued viability of the TFL under increasing question, the Bulldogs opted to leave the competition at the end of the 1997 season to join the NTFL. Not for the last time, South Launceston found immediate success after shifting to regional football, claiming back-to-back NTFL premierships in 1998-99. After nine further seasons in the NTFL, South Launceston was one of five northern teams to join the re-formed Tasmanian State League in 2009.

As had been the case in the late-80s, the Bulldogs initially found the going tough at state-wide level, however the appointment of former Hawthorn forward Mitch Thorp as coach in 2012 led to a dramatic improvement in the club’s fortunes, and in 2013 the Bulldogs claimed the premiership with a nine-point win over Burnie. Amazingly, South Launceston went into the match knowing that it would be their last in the TSL: several months earlier, club members had voted not to accept a 50% stake in a TSL licence in partnership with the Prospect State Football Club, instead opting to return to regional football in the new NTFA. The move paid dividends immediately, with the Bulldogs winning back-to-back premierships in 2014-15, the latter completing an undefeated season. A third flag followed in 2017 to once again confirm South Launceston as the premier team in northern regional football.

Though no longer in the top flight of Tasmanian football, South Launceston proudly continues the legacies of the two great clubs who came together to form it more than 30 years ago. Combining City-South’s relentless pursuit of success with the loyalty to the cause that made East Launceston so admired, the Bulldogs have navigated the turbulent waters of Tasmanian football with aplomb, and appear set to do so for a long time to come. They – as well as their famous predecessors – fully deserve official recognition as Great Clubs of Tasmanian football.